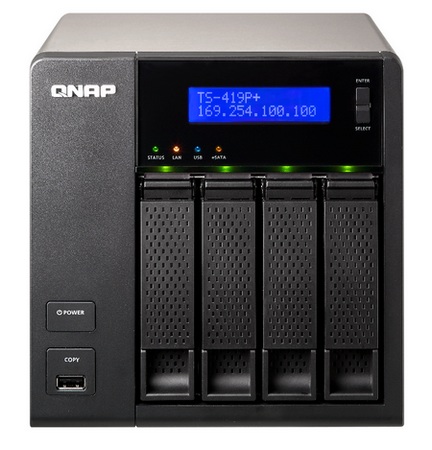 NAS boxes are becoming more and more the staple of office and home.The official name for this type of device is “Network Attached Storage”, With the possibility of direct access to your data through cloud services or with your favorite mobile device, it is becoming more about connectivity than the ability to store and transmit files at gigabit speeds at home or place of work.

The TS-419P II NAS Server is the next logical progression from a two-bay device. While a larger unit than many other NAS devices on the market, it is surprisingly not the largest. It hits the middle market sweet spot – high-technology homes and small businesses. If you need the capacity and redundancy, RAID 5 is necessary to implement a minimum of three disks.

If you want to go to RAID 6 or RAID 10, you requires a minimum of four disks, with two spindles to provide multiple levels of data redundancy. Now one is left with effectively two drive bays for storage, a four-bay device, such as TS-419P II is really the bare minimum for high availability of NAS devices.

Three characteristics continue to dominate any discussion of networked storage hardware: data capacity, data security and data transfer speed, but over the last few years there has been an increasing focus on the software side.

QNAP has always aimed to the top of the NAS server market with performance and features such as two Gigabit Ethernet ports with failover, a full range of RAID functionality, and a diverse, rich user interface features. Version 3.4 was a major update to the QNAP software suite, and have explored many of its key features and capabilities of the recent reviews. Version 3.5 was released a few weeks ago, and we will follow up in the near future to see what’s new there.

When you add in new features recently added QNAP, like RAID 10, Real-time Remote Replication, ElephantDrive Cloud Storage, Download Station V2, MyCloud NAS Remote Access, and USB Wi-Fi Network Adapter Support, it is apparent that you get a lot more with this device.

The performance of the QNAP TS-419P II Turbo NAS server was extremely solid. The impressive Marvell 88F6282 chip, which contains a single core 2.0 GHz ARM v5TE CPU with 256KB L2 cache, made a noticeable difference in performance compared to the 1.6 GHz version of the TS-219P+. QNAP stuck with SATA-3 Gbps and USB 2.0 interface on this device.

The two eSATA ports on the rear panel allow external devices to interface to run at full speed to compensate a little gap in the performance of USB. The best reading performance recorded for the TS-419P II was 97 MBps, and the best writing speed was 89 MBps, which are very good but not exceptional. The extra load related to RAID 5 operation was not handled as easily as it was in some Intel-based units we’ve seen, and results in RAID 5 writing were nowhere near the results of a single disk, with maximum transfer rate of 57 MBps.

The QNAP TS-419P II Turbo NAS network storage server is best suited for SOHO uses. The applications are well made with documentation that most of techies would be able to handle the configuration and management of even the most advanced freatures.

There are a lot of functions that are important in a business environment, but the availability of web applications is also good with support for several consumer-cloud computing services just one example. QMobile application for handheld devices to stream music, digital photos and videos from a QNAP NAS server directly to your mobile device, is another. Most of these consumer features are easier to configure than the more technologically-minded applications, such as VMware and iSCSI.

The QNAP TS-419P II Turbo NAS is the most appropriate server for the SOHO environment, but its size, performance and features could certainly fill a gap in the enterprise.