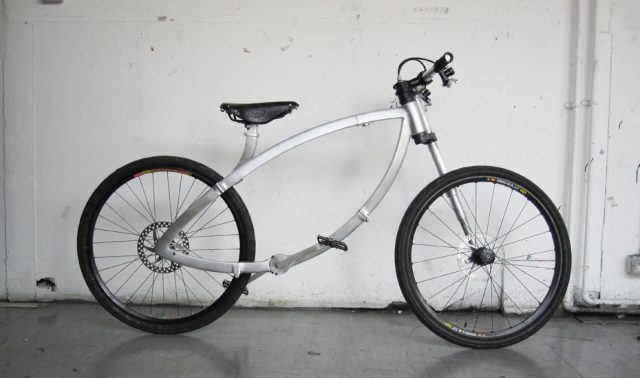 If you have ever tried
to get a bike on the tube you will know of the ire that you cause
fellow commuters and train staff. One London inventor has managed to
invent a bike you can actually ride and carry on the tube without being
beaten up.

Dominic Hargreaves, 24, came up with the idea after he couldn’t find a fold-up bike he liked.

"I wanted something that could take a bit of punishment and that you
could have fun with, like jumping off kerbs and even going away at
weekends," said the graduate of the Royal College of Art.

Dubbed the contortionist, the bike has been short-listed for the James
Dyson Award for international designs. The bike can be riden around
town then simply folded up and
"taken for a walk" with the owner holding it by one handlebar so it easy to use on buses and the Tube.

He said that he wanted to "create a folding bike where all the parts fit in between the
circumference of its 26-inch wheels when it is folded up. Once folded
the bike cannot fold back on itself while riding."

Hargreaves said  he was discussion with several potential partners
to manufacture the bike. "I’m really at the stage where the design is finished, but I need
some financial backing to get things rolling."