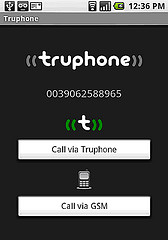 Truphone is certainly
putting itself about a bit. It’s surfaced on the iPhone not so long ago
as well as the iPod Touch but now it has come to Google’s Android-based
G1 phone.

The Truphone Anywhere for Android app is billed as the
"all-in-one conversations hub" that allows customers to take advantage
of what the company says are low international call rates.

While cheap internatinal calls is what Truphone would like you to
really do (a lot) – the app also lets you send instant messages to you
mates on a variety of IM, such as MSN, Yahoo!, Google Talk and Twitter
from within the application.

Users can also chat to frineds anywhere in the world on Google Talk at
local call rates. Strangely Skype functionality is promised soon rather
than being available immediately.

The app is available via the Android Market for nowt for UK and US users.

Is this the Google Android G2 phone?

How to unlock your Google Android G1 smartphone

Android owners to get new batteries

How to buy an unlocked Google G1 Android mobile phone