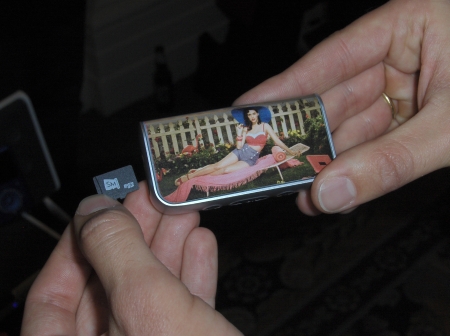 The American airwaves are filled with Katy Perry’s latest tune as we wind our way across the East Coast (no cherry chapstick action this time, just some Hot N Cold running girl angst). And it made us think of something SanDisk showed us aggggeeeessssss ago…

At a Digital Winter event in London, the company had a few of its slotMusic players to hand.

These players allow you to place the albums bought on microSD cards in them for quick listening. Same as a lot of players, you’re probably thinking.

However, SanDisk also sells skins for the slotMusic devices that personalise the player with the artists you’re listening to.

“It’s currently only available in the US but is due to be launched in Europe in early 2009,” the PR guy tells us, although he adds that “no definite dates have been given”.

This was posted using the IPassConnect global wireless and US 3G service. For more details visit the iPass website.