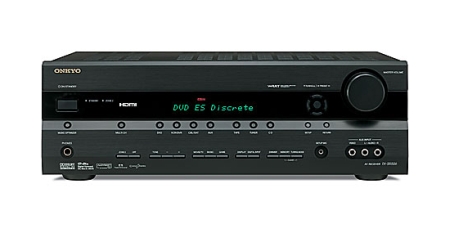 When you start to get a bit more serious about your viewing habits, you’ll want to take your basic TV and player selection set-up to the next level: full-on home cinema. Onkyo thinks it has the right audio/visual receiver to make that happen without breaking the bank. So just how good is the TX-SR506?

Well, in a modern world where your satellite/cable box, upscaling DVD player, games console or Blu-ray player might sport a HDMI connection, it will help you deal with three of them at once.

Setting up three HDMI devices gave us our first minor winge. This is an entry-level (ie. inexpensive) model, so that all important extra HDMI cable isn’t included as standard. So, even though you might already have a HDMI lead for your PS3, Sky HD and multi-region upscaling DVD player (we do), once they’re all plugged into the Onkyo receiver you’ll need an extra one to go from that box to the TV. Bummer.

So, what does your £250 buy you? Well, there are naturally 7.1-multichannel inputs, which deliver a very respectable 130 watts of power. However, the array of connections on an impressive back view of the box hides a very annoying fact: the Onkyo TX-SR506 does not accept audio signals via HDMI.

What you’ll need to do instead is pair each individual HDMI connection with an audio source using a different connection for each one. If you’re a novice at this stuff, then good luck – you really will wish you’d splashed out a bit more for a player that uses the sound from your HDMI connection. Otherwise, once you’ve worked around this problem it’s finally time for a test run.

Set-up is carried out using an included audio mike, which is placed in the room at different points. This works out how the sound will be heard based on the speaker positions and automatically sets their levels. The procedure can also show up any errors in your current set-up. Listening closely at which speakers had already been tested, we were able to figure out which one wasn’t firing (because of a cable thinned by the cutting procedure) and re-connect it to complete the set-up.

So, is the result worth it once all the minor annoyances are out of the way? Thankfully, the quality is crisp enough to make all that head scratching worthwhile. The price tag suddenly seems more like a positive than a negative as the excellent audio manages to cover a range of sounds that’ll keep film fans happy whatever their choice during a sofa session.

So, you’ll feel the tiles skitter off the side of Hogwarts in the dragon chase scene from Harry Potter, but also pick out the delicate instruments in the music from Ghost In The Shell: Innocence.

Impressively, the remote control also manages to look quite classy, thanks to a glossy black design that won’t look out of place next to your other control sticks. That’s a bonus, as it’s often the first place cuts are made on entry-level systems – but there are no squashed together buttons or cheap plastic finishes here.

Overall, a top-notch sound should make this a no-brainer at this price point. And those three HDMI connections also make a very useful way of having all your kit sorted in a single device, cutting out any annoying fiddling behind the back of your flatscreen. However, the fact that the audio from your HDMI inputs is only passed through to your television and will never be heard on your speaker set-up is a major sticking point.

(Specs on next page)

Review: One For All Xsight Touch