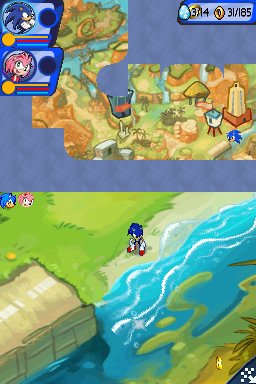 Anything
Mario can do, Sonic will at the very least have a crack at. From
platforming to tennis to racing, this has been the rule for many a
year. And yet that plumber fellow has starred in no less than six
critically-acclaimed RPGs, and ‘hog-boy has been uncharacteristically
lazy about the whole concept. Until now.

In
bringing its speedy hero to the most unspeedy of genres, Sega has sensibly farmed out the work to RPG maestros Bioware (the team behind
Mass Effect and the Knights of the Old Republic titles). Bioware claims
to be hardcore Sonic fans and blimey, its not kidding. Chronicles
is catnip for the diehards, with old games, cartoons and comics all
referenced in various ways (even Blighty’s own Sonic the Comic gets a
nod). If, like your humble writer, you’ve been following the adventures
of this lippy little speedster for longer than you probably should
have, I defy you to play this without a big grin splattered all over
your face.

We’d also like to take a moment to
applaud the scriptwriters. Sonic is frequently saddled with a plot
that’s either too simple or trying too hard to be all grown-up.
Bioware, though, has got the tone spot-on and also found the time to
gift a few characters with genuinely laugh-out-loud lines. (Rogue robot
Omega even invokes the spirit of his mightiness Bender B. Rodriguez at
one point.) Sadly, Bioware’s famed "play it your way" approach to
characterisation obviously had to be reined in when dealing with a
company’s mascot, but you are frequently given the opportunity to make
Sonic act like a sarcastic jerk purely for the pleasure of acting like
a sarcastic jerk, which is delightful.

{mospagebreak}So, some
slightly naff 3D graphics aside, the presentation’s impeccable. But the
gameplay? Um. The majority of your time is spent battling, and the
battle system needs a few kinks ironed out.

You
start off with just Sonic in your party. Eventually you get eleven
characters to choose from, though you only use four at a time. However,
the battle system is clearly designed for four characters and a decent
amount of POW attacks (read: magic spells). The net result is that the
first five or six hours of the game are a bit of a slog.

Once
you’ve got a good fighting force under your belt, though, things look
up. POW attacks are where the fighting’s at, and they’re inputted via
Elite Beat Agents-style tapping, sliding and poking, which keeps the
turn-based action fresh. In a nice touch, the enemies’ POWs also flash
up on screen, and by correctly inputting them you can cause them to
miss. Nifty. There remain a few niggles, though, such as the fact that
there’s no text explaining what your items do mid-fight.

{mospagebreak}Outside
of fights the play’s a little shallow. Most missions are a case of
"fetch this, go there", though there are a few puzzles that require you
to use all four characters at once. They’re pretty simple, mind. It’s
at about this moment you realise that this is essentially My First RPG
– Sonic’s fanbase can be divided quite neatly into twentysomethings who
were kids when the first Mega Drives came out, and kids now, and the
game’s mechanics are more clearly aimed at the latter. It’s not bad,
just a little disappointing, but understandable.

Chronicles
can be irritating, but you’ll find yourself always ready to forgive its
flaws. Still, let’s have a sequel that irons ‘em out, eh, Bioware?