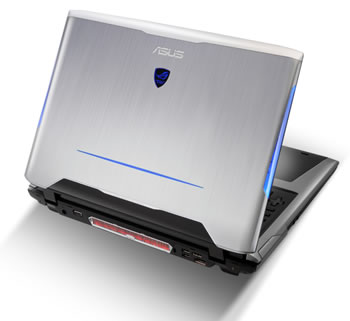 Now it may seem like a strange idea to cram a gaming computer into a laptop, but Alienware (which is now part of Dell) has been doing it for years, so there’s definitely a market out there. The new Asus G70 notebook computer promises bags of style but does it deliver hardcore gaming substance?

Looks-wise, it is hitting the design-conscious gaming crowd square on, as it has to be said it looks pretty cool. It is rather heavy on the lap, but then a lot has been crammed in to make this a gaming computer and there’s only so much you can fit into a small space. And when we say heavy (4.9kg) we mean oh my God cancel the gym membership – carrying this around will get you fitter than a round on the Wii Fit.

One thing that has to be said about its design is that the flashing lights at the side can start to get annoying (although this is a gaming laptop, so we guess that agression will get you in the right frame of mind to kill!).

Another thing that slightly gets our collective goat is this whole "Republic of Gamers" thing. The graphic appears twice on start up for no discernible reason. Maybe it appeals to the younger crowd (along with the puurty flashing lights) but it was, again, a bit annoying.

Shove those things aside though, and the G70 is truly a thing of beauty. And the beauty is not just skin deep. Underneath the hood just about everything you could want, including an Intel Core 2 Duo T9500 (running at 2.6GHz), 4GB of DDRII 667MHz of memory (which makes Windows Vista Home Premium run the way it should). There is also 2x Nvidia GeForce 8700M GT DDR3 512MB in SLI and 640GB of hard drive storage.

Luckily the optical drive doesn’t let us down. There is a DVD Super-Multi Light Scribe/ Blu-Ray Reader/ Blu-Ray RW. And connectivity is taken care of with not just a gigabit Ethernet port but 802.11a/b/g/n wireless and Bluetooth V2.0+EDR.

One bonus of the laptop being so big is the screen. It is a whopping 17-inch TFT WUXGA with Colour-Shine and a 1,440 x 900 native resolution.

As far as accessories are concerned, it comes with a rather nice Asus-branded Razer Copperhead mouse and a nifty Asus rucksack (for carrying around to Lan parties).

The keyboard is a full size affair and good to use, although even that’s a bit of a shock if you are used to today’s teeny laptops. There is also a set of programmable keys at the side of the keyboard that you can, well, programme.

The touchpad is fairly responsive and lurking beneath the surface is a multimedia control pad for a media player.

The display is great, considering its a laptop. Playing a variety of games proved it was capable of performing with the like of Crysis and all that. Disabling the touchpad also means that you can move around the keyboard without accidentally brushing the pad and making the wrong move.

At the end of the day, this is more of a desktop replacement than something to use out in the middle of nowhere. The battery doesn’t last long enough to make it truly portable outside areas where you’ll be away from a plug socket for too long. And while it’s unlikely to impress gamers who are firmly stuck to their all-powerful  desktop towers, it fast enough to give mobile gamers their fix. Even if it fails to impress the hardcore gamers, this could well find a sweet spot among the public.

Images on next page…