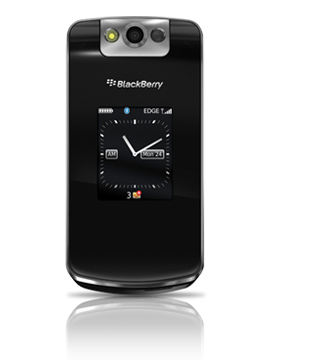 We’ve
never been a fan of flip phones (they make you look like an extra from
Star Trek) but it’s a popular form factor. Addictive smartphone vendors
RIM not being ones to shy away from consumer market anymore, has bought out a new clamshell phone for the masses called the Pearl Flip 8220.

The
phone, first available on T-Mobile in the US with the rest of us to
follow later in the year, is the company’s first foray intoclamshell
smartphones and marks a move from its traditional candybar phones. In
the US, most cell phone users like the clamshell type of phones. Jim Balsillie, co-chief executive of RIM,said that nearly three-quarters of Americans have this type of phone.

The Flip comes after the Pearl, which the company launched two years ago as its first consumer device. Both units have 20 keys and
double up some letters on each button. The wider business-oriented phones put a letter on each key.

The
quad-band EDGE based BlackBerry Pearl Flip smartphone has a
chrome-finished frame surrounding its luminescent face. While it only
weighs 3.6 ounces and measures approximately 3.9" x 1.9" x 0.7" it
managed to squeeze in a wealth of features.

There is also a speakerphone and Bluetooth 2.0 for hands-free dialing,
stereo headsets, car kits and other Bluetooth peripherals such as a GPS
receiver.

The removable/rechargeable 900 mAhr battery provides four hours of talk time and over 14 days of standby time.

The phone can be used to access up to 10 supported personal and work
email accounts, send and receive text and instant messages.

The DataViz Documents to Go software suite is also preloaded, so you
can edit Microsoft Word, Excel and PowerPoint files directly on
the handset.

The BlackBerry Pearl Flip works with the new BlackBerry Media Sync
application so it can sync iTunes digital music collections
with the smartphone and it also features a microSD/SDHC memory card
slot that supports up to 16GB for additional storage.

There is also a 2 megapixel camera with flash, zoom and video recording,
and includes BlackBerry Maps with step-by-step driving
directions.

"The popularity of
BlackBerry smartphones has grown tremendously around the world and the
introduction of this exciting new flip phone will help extend the reach of the
BlackBerry platform even further," said Mike Lazaridis, President and
Co-CEO, Research In Motion. "The BlackBerry Pearl Flip is a full-featured
smartphone with a unique and friendly design and it is a natural choice for
flip phone users who want to start doing more with their phone than just
talk."

Pictures of the new phone on next page…{mospagebreak}