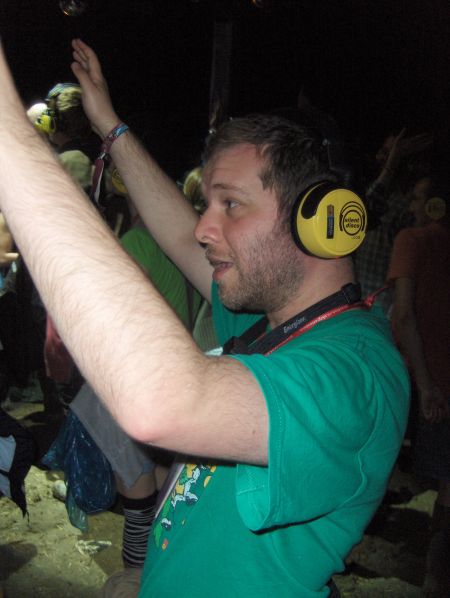 Ever been getting your groove on only to have the DJ misjudge the mood on the dance floor and whack on a crowd killer? Ever wished that American Pie was eight minutes and twenty-seven seconds shorter so you could get to the next tune? Say hello to the Silent Disco…

To use a much overquoted ad phrase, this does exactly what it say on the tin. Wander into the tent and you may hear the other disco-goers, but you won’t hear any music. Not until you put those wireless headphones on, anyway.

And this year, things have gotten an upgrade. At Glastonbury 2007 if you were stuck with one of the two duelling DJs playing crap Euro house you had to convince a gurning idiot to swap headphones with you. In 2008 you could choose between the two DJs with a flick of a switch on the bottom of one of the earpieces. This led to much arm waving from friends to switch channels when a ‘classic’ such as Living On A Prayer hit the channel you were ignoring.

OK, so occasionally some problems with the signal created a bit of static in the headsets. But when you get the choice to silence Kate Nash’s cockney whining, the odd crackle can be accommodated. Moving around the disco also helped find the optimum signal spots to cut this problem down.

One bonus feature of the Silent Disco is that it doesn’t actually live up to its name. With enough people joining in, the strains of Wonderwall sung by hundreds of drunk, excitable festival goers can be heard from some distance away.

Overall, in true Spinal Tap fashion, this review goes all the way to 11 for an awesome experience.