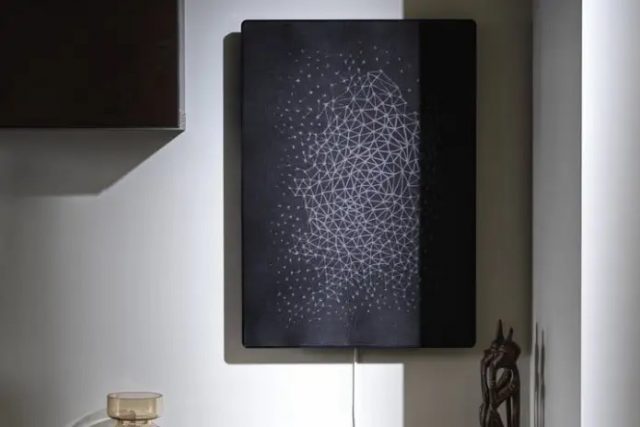 Ten years ago, no one could have imagined that IKEA would once again bring speakers to the market. Nevertheless, the furniture chain now has a nice range, including several smart speakers in the Symfonisk line. The third variant of this has just appeared on the market: the ‘Symphonic Picture Frame with WiFi speaker’. Quite a mouthful, which in any case makes clear what the difference is with the existing ‘ Symfonisk Table Lamp with WiFi speaker’ and the ‘Symphonisk WiFi bookshelf speaker’.

Like the rest of Symfonisk speakers, the new Picture Frame was designed together with Sonos and fits seamlessly into the Sonos ecosystem. And like its two predecessors, it is available in white and black. The Picture Frame costs 179 euros, just as much as the Table Lamp. Both are therefore slightly cheaper than the One, the entry-level model from Sonos. The Picture Frame is, however, a lot more expensive than the entry-level model from IKEA itself: the Bookshelf speaker. It costs just under 100 euros.

What is striking about the Picture Frame is that it is so flat. The frame measures 57 by 41 cm and is 5.5 cm deep. That seems quite thick, but in practice, you see less of it than you would think. That’s because IKEA has been smart enough to put the electronics in a smaller part of the housing. That part is only 48 by 32 cm and sticks out slightly at the back. This is hidden from view by a thinner part, which is only 1.5 cm deep. That is the list you see when you hang or put the speaker down. So, you see that thin frame, which is no thicker than the frame of the average photo, with a few centimeters of space behind the frame.

The part you see has very thin plastic edges within which a canvas with an image is stretched. Just like with the Bookshelf speaker, that panel can be replaced. Only there is more choice here, which is, of course, to be expected from a product that has been christened Picture Frame. Initially, the speaker is available with white or black cloth, but from September 1, IKEA will supply three other panels. It is already clear that more designs are coming. Anyone looking for something will find at least twelve designs that will become available in the coming months. The first three panels cost £15, the later models all cost £30, a remarkable price difference.

The big question is whether IKEA will offer the option to supply a design that you can have printed on a panel. The company has not disclosed anything about it yet. A third party will offer that option. It should not be too difficult for the tinkerer to remove the cloth from an IKEA panel and stretch a new cloth over it himself. The panels consist of a plastic frame with a honeycomb profile to which a thin cloth is glued. With some patience, it should be possible to pick off the existing cloth and glue a new cloth on it.

Sonos is responsible for the inside of the Picture Frame, but the IKEA designers have thought carefully about the outside. This is especially apparent when we look at the back of the Picture Frame. In the edges, you will find six oval recesses through which you can press the printed panel out of the housing. More striking is the cutout at the bottom of the speaker. In that recess, you will find the Ethernet connection and the C7 mains connection. Just like the Bookshelf Speaker and Table Lamp, the Picture Frame must therefore be connected to the mains to do its work. So, there is always a power cable running to the speaker, even if you hang it on the wall; not everyone will be happy about that. A built-in, rechargeable battery would have been a solution, although the speaker would of course have become a lot heavier.

The C7 mains connection in the recess is double. You will find a ‘female’ and a ‘male’. That man offers the possibility to connect a second Picture Frame to the same power connection. So, you need a C7 extension cord for that, again with a male and a female. IKEA also has an extra power cord on offer, in both colors. IKEA supplies a white cord with the black speaker as standard, but if you want a black cord with it, that is possible.

The cutout on the back can be used to store excess cord if the 3.5m steam cable that comes with it is too long. There’s even Velcro in the pocket to keep the excess cord in check. You will also find some slots at the bottom and the two sides of the recess in which you can clamp the cord.

IKEA supplies a metal plate with the Picture Frame that is intended to attach the speaker to the wall. The plate can be screwed to the wall, after which the speaker can be hung in a horizontal or vertical position. Two rubber caps in the color of the speakers are also included. Those caps fit in two recesses in the side or bottom of the speaker. You use them if you want to put the speaker down instead of hanging it up. This can also be placed horizontally and vertically. The caps serve as insulation so that the speaker does not transmit vibrations to the floor. Very handy: in the back of the speaker there are two extra recesses in which you can park the caps when you are not using them so that they do not get lost. On the back, you will also find four fabric pads,

Overall, IKEA has designed excellent housing for the Picture Frame. It may be a bit ‘plastic fantastic’, but then nicely finished plastic. You can’t expect much more for this price. It may seem that the speaker and especially the panel is warped, but this usually means that the panel is not properly clicked into the housing.

The idea Sonos and IKEA have with the Picture Frame is fine. The idea of ​​a speaker that is so flat that you can hang it unobtrusively on the wall came clearly from the interior designers of the furniture store and presented a challenge to the engineers of the speaker manufacturer. Anyone who designs a speaker is looking for volume and that is what is just not available with such a flat design.

This is also noticeable in the result. The ‘Symphonisk Picture Frame with WiFi speaker’ is a speaker that we have mixed feelings about. The construction of the housing that the designers have produced is cleverly put together. The thin edge of the panel, the click system that makes the panels easy to replace, the recess on the back in which you can click the power cord and store excess cord: all good.

The idea of ​​replaceable panels is also fine, and it is promising that IKEA has already announced fourteen different panels. It is, of course, generic art, but you may not expect more from a furniture chain like this one. It is a mass product, with a corresponding price. The option to submit a design yourself could overcome this. However, that option is not yet available.

As far as sound is concerned, it is clearly noticeable that the designers of Sonos were faced with a challenge. The bass reflex port delivers a tight low end, but that low end doesn’t extend too far. However, it is the sound of the tweeter that dominates. It makes the Picture Frame sound shrill. Together with a not-so-deep continuous layer, this results in the device producing a cheap sound.