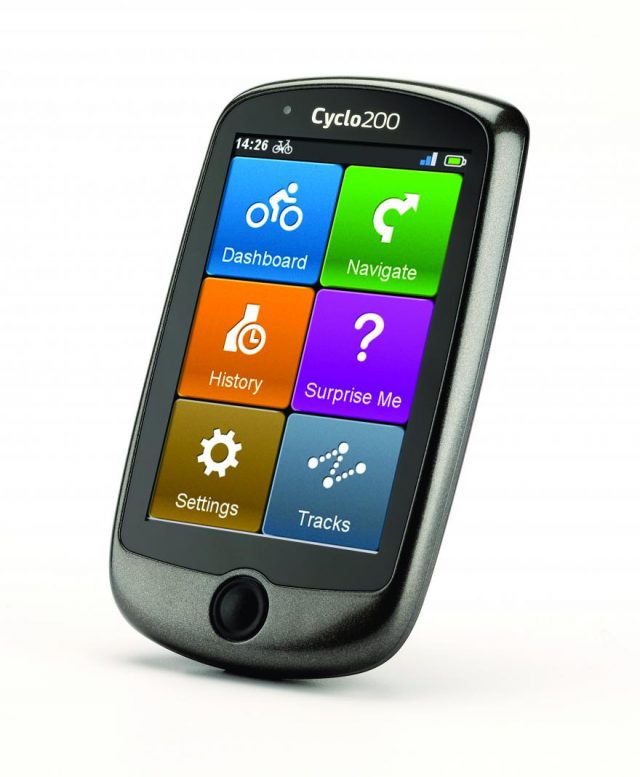 Car navigation is a given, but cyclists and bikers also like to use satnavs as well. Besides cyclists and mountain bikers who use the devices to measure speed, heart rate, and cadence, there are more and more recreational cyclists who use navigation. For the latter group comes the entry-level model: the Mio Cyclo 200.

The Cyclo 200 looks at first glance like a rather old mobile phone. The device has a 3.5-inch large touchscreen above a large button. Furthermore, with almost 2cm quite thick. The length is 11.5 cm. At the rear is a bulge which the device can be attached to the bike mount. The bicycle rack is included and consists of a plastic ring. At the bottom of the device, there is a microSD and microUSB port.

Before you can go for a bike ride with the Cyclo 200 you have to mount the bike mount on the handlebars. This is done through two tie-wraps, so even the biggest fool can get it. Next, it is a matter of placing the charged Cyclo in the holder. Open Street Maps of Western Europe installed as standard on the device.

The Cyclo 200 is an entry-level model and, therefore, cannot connect to additional sensors, such as, for example, a heart rate monitor. More expensive models offer this option, though.

The operation is very intuitive. On the main screen are six buttons: Dashboard, Navigation, History, Surprise Me, Settings, and Tracks. Before you start going, you can specify the settings on what bike you ride: city bike, mountain bike or road bike. The Run option is there, but it seems that runners may not use the Cyclo as it is slightly too cumbersome.

In addition, to the type and weight of the bike can also date of birth, sex and weight are entered by the user. These data are used to calculate the number of calories used that are displayed on the dashboard. Also, distance and speed can be read here.

On the Settings menu, pressing this button shows your position by address as well as latitude and longitude. This can be useful if you need to pass your position to the emergency services.

Users want to be able to show an address or Point of Interest on the Navigate button, such as a bike shop (useful in case of breakdown), restaurant, ATM or tourist attraction. It is also possible for the device to retrieve an itinerary through the Surprise Me feature. This is useful for people who want to make a leisure trip but do not know well where. You can specify how long you want to cycle in terms of time or mileage. it is also possible to introduce own routes using the corresponding desktop application.

Setting a route and securing the Cyclo in its mount is a piece of cake. Once you start cycling, the device detects motion. It then asks if you want to start recording.

You can also look back at previous journeys, including speed, calories burned and altitude. It is also possible to connect the device to the computer and transfer the data to the desktop application.

If you accidently set off too early too early it starts beeping device. The beeps are quite loud and annoying. The route that the device indicates is not always the fastest, I have repeatedly encountered during my bike rides through London. When you deliberately deviate from the route, the beeps keep coming.

During the test period, the device fell out of the mount a couple of times. Twice when I had to brake quite hard and once after I drove over a speed bump. I could immediately test whether the device can take a beating and that is certainly the case.

According to the manufacturer, the Cyclo 200 a battery life of 10 hours, but in practice this was slightly less.

The Mio Cyclo 200 has all the features you would expect from a basic bicycle navigation device. Entering addresses and tracking the routes is fine. However, you get there, if you ride on familiar ground, but this is not always the fastest route. When the device is used for recreational purposes it’s not bad, but a bike courier would be less pleased. Furthermore, it would be wise to give users the ability to mute the annoying beeps. The biggest problem for me is the inferior bicycle holder.