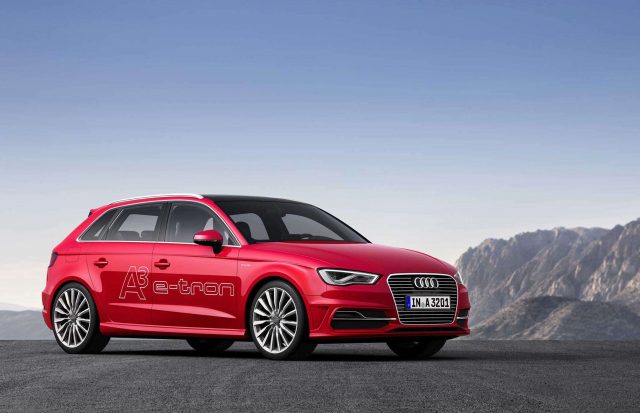 Running a sporty car would make you think that running costs would be staggeringly expensive. But the Audi A3 e-tron Sportback promises to squeeze every mile from any gallon you put in.

The reason for this is that under the bonnet is a 148bhp 1.4 litre TSI engine and a 99bhp electric motor crammed between the gearbox and power unit to drive the front wheels.

The A3 e-tron’s 8.8kWh, 125kg battery can be found under the rear seat. The fuel tank has been moved and lives beneath a slightly raised boot floor. Despite this being nearer the back the car can take a 50mph rear impact without the plastic tank rupturing. To charge the batteries up there is a power socket hidden behind the four rings of its grille. The battery adds 125kg to the A3 Sportback bringing the kerbweight to 1540kg.

The car can be driven in battery mode alone, or assist the engine to boost performance. The button on the dashboard lets you choose between four different driving modes: EV, Hybrid, Hold and Charge.

With a full charge, EV enables the driver to travel about 30 miles at speeds of up to 81mph in just electric mode. Hold saves battery power until you get to into town.

When the battery runs out, Charge mode uses the engine to top them up again. But this comes at the cost of fuel efficiency. Hybrid is the default mode where the car switches between electric and petrol to make best use of what’s available.

Audi claims the e-tron has a CO2 equivalent of just 35g/km. This means you don’t have to buy road-tax. Its theoretical fuel consumption is 188mpg.

On the outside, the A3 e-tron looks no different to its petrol-only cousin. It would be difficult to spot any weight gain the car has had to make in order to accommodate the electric battery.

On the inside of the car, the A3 looks superb. The layout is intuitive and looks wonderful. You really feel you are in a luxury car. The Multimedia system is good for a car, but takes a while to get used to. A rotary dial is used to navigate through the functions.

The rear seats don’t seem to suffer from having a battery underneath; there is plenty of leg and headroom. It doesn’t feel compromised.

The drivetrain that flits between petrol and electric is complicated but this never appears that way when you drive it. When driving around town, the battery engine is so quiet it is hard to know if the thing is going to move until it does.

The car has a lot going for it and anyone that wants to make the move to electric but is worried about it running out of charge, this is a car to consider.