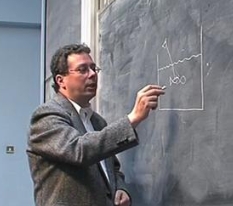 Yes, it’s time to trot out the “living in the future” line. That’s because a scientist has won the Royal Society’s Theo Murphy Blue Skies award, which means he can fund his plans to develop a cloaking device for the next two years.

Professor Ulf Leonhardt, who can proudly say he has a name as ace as his aim, want to make us all vanish and is working on a blueprint at the University of St Andrews.

He cites Harry Potter’s invisibility cloak and the Invisible Woman from the Fantastic Four as two of his main inspirations for the idea, which he’s been investigating for the past three years. Leonhardt says his technique involves “geometry, light and a wee bit of magic”.

“The idea of invisibility has fascinated people for millennia, inspiring many myths, novels and films,” he added.

One of his concepts involves exploiting refraction and reflection, in the way that objects underwater can appear to be in different locations depending on where the observer’s standing. A video of him going through the theory can be found at the university’s website.

“Imagine a transparent material that guides light around an object without distorting the light – the object would disappear from view,” he said.

“I will most certainly find easier ways of cloaking, but it remains to be seen how practical they are. The important thing is to understand the foundations and come up with something new or take an existing idea to extremes; using technology and ideas to make things happen – technology we cannot imagine would ever exist.”

Living in the future!