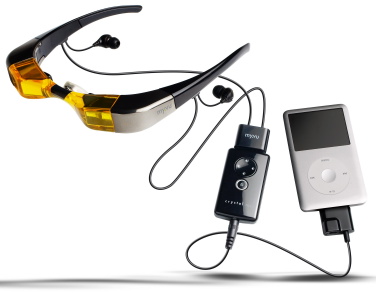 A lot of people of video iPods and while its great that you have vision
as well as sound, the screen is a might too small (even smaller on the
iPod nano). Add to that you have to hold it at the right angle for long
periods (it does get tiring on long transatlantic flights) and you can
see the need for a screen you can wear. MicroOptical Corporation has a
solution to viewing problems with its Myvu Personal Media Viewer that you wear like glasses.

Initially, these glasses when pulled out of the box do really look like they’ve been stolen from Geordi La Forge
from the Starship Enterprise. It comes with a variety of cables to
attach it to various mp3 players, notably the Video iPod. It can also
plug into the Nokia N95.

The glasses (or viewer, whatever you
what to call it) sits nicely on the nose. As a wearer of glasses for
many years, this is a good sign. Also the earphones come with different
ear bud pads to suit most ears. These work so well you hardly feel them
until you take off the glasses without realising that the ear buds are
still in your ears (ouch!)

Setting up the device to connect to
your mp3 player is logical enough. We took the iPod cable that came
with the viewer and connected it to the universal dock of the iPod.
This then is connected to the pendent controller which houses the
battery for the device as well as simple volume and other controls. It
has to be said that you have to make sure that all the cables are
properly inserted into their ports, otherwise playback becomes a hit or
miss affair.{mospagebreak}As for the screen it is 640 by 480 VGA LCD display
with 24-bit colour depth, which when viewed gives the impression of a
much larger screen. The ratio is 4:3, this is what is termed
fullscreen. As a fair few of us have widescreen this may appear to some
as a backward step.

If you are like us and need glasses to see
anything then without the addition of optional clip-on lenses, the
screen will seem out of focus. We would like the next version to
incorporate some kind of focus mechanism that doesn’t need to rely on
an optional extra to rectify our deficient eyesight.

That said,
the screen can accept composite, NTSC and PAL signals. So in effect all
standard definition signals. We suppose to get this far in the price
range is good going, but we cannot help thinking that in these days of
high-definition television, users would be expecting much sharper and
higher resolution pictures. Also, the screen is a little bit smaller
than we had hoped it would be.{mospagebreak}The sound from the ear buds (or
rather canalbuds as the fit well within the ear canal) is acceptable
but nothing we would call stellar. Compared to the audio quality of our
test Shure e2c earphones, we picked up sound artifacts from the test
videos when using the earphones of the device (these test videos were
the Rick Gervais podcast and Richard Dawkins’ The Genius of Darwin).
With the Shure e2c earphones in use the same audio track fared much
better with a less harsh sound.

Overall, it is a very good
attempts at providing iPod users with a means to watch videos in
private in much the same way earphones give users the chance to listen
to audio in private. Perhaps we are expecting too much from this
product in as far as audio quality and screen size and resolution.
Also, for us with slightly dodgy sight adjustable focus would come in
handy (without resorting to clip-on accessories)

No doubt the
manufacturers are working on bigger and better so we have some hopes
that the next version will be an improvement on this.