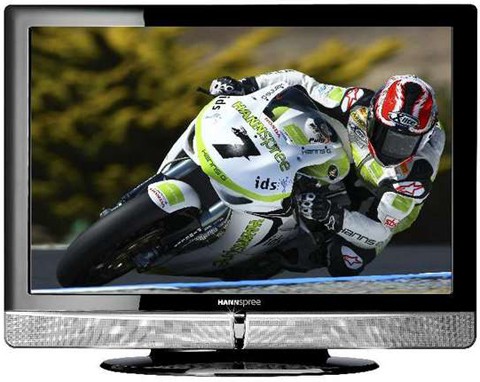 With the credit crunch really
starting to take effect, consumer goods are starting to look a tad
expensive even for the most gadget-obsessed among us. Lucky for us
those kind people at Hannspree have bought out an HD television that
won’t break the bank (even in Iceland).

The HT09 is a full 1080p
TV with a 1920 x 1200 resolution. Hannspree reckons this magic
rectangle has "spectacular visuals that wow". Not only that, it should
cope well with fast moving sporting events with its 3ms response rate
reducing smear and jittering. Although the two 5 Watt speakers may
leave you looking for an amp to go with the telly.

Also the television will connect with more things than you can shake a
high-definition stick at. This includes two HDMI ports and two Scart
inputs as well as component, composite and VGA. You can also run a
Modem through the TV too!

Hannspree claims to "wrap up" everything a user would need in a HD LCD
Television, even with VESA mounting capability and Super-wide 160
degree viewing angle.

The new HT09 is available to buy at £279.99 now from those guys at www.misco.co.uk. (slightly less expensive than Icelandic bank shares – probably).