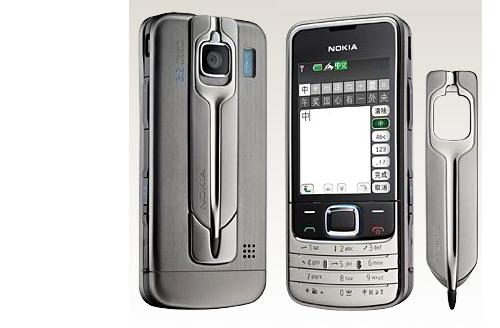 "Never say never" should be the motto of Finnish phone giant Nokia. The
company is to launch yet another touchscreen mobile in the shape of the
6208c.

The device, which follows the new touchy-feely tradition that Nokia has
lately developed with the launch of the 5800 XpressMusic and N97
mobiles, comes with a stylus (often hated by the true touchscreen
connoisseur).

That said, the stylus is "inspired by bamboo slips and works perfectly
with the large colour display which is reminiscent of an ink stone"
according to the guff Nokia said in a press release.

The mobile has been developed for that lucrative Chinese market, so is
tuned up for Chinese character recognition, which allows the (Chinese)
user to construct messages in the "most natural way".

The specs of the beast look good. It comes with a 3.2 megapixel camera,
an 8GB memory card and dual LED flashes. It also boast a 2.4-inch
display and a full alphanumeric keyboard. Also featured is  Bluetooth
2.0 support and a 3.5mm headphone jack.

It would be just good to have one of these coming to the European market. It hits the Chinese by the end of June.

This blingtastic Nokia phone is fit for a princess

Is this Nokia gun phone for real?