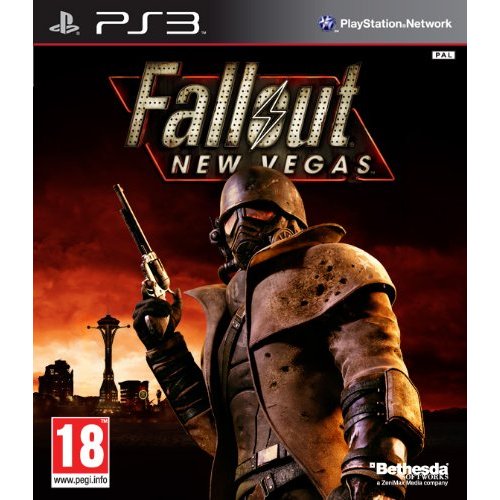 A little backstory first, for anyone new to the series. Fallout takes place in an alternate history, which split off from our own in the 1940s. In Fallout-land, technology evolved much faster, but the aesthetic style and cultural norms of ‘50s America endured, resulting in a Jetsons-like world of rayguns, picket fences and robots straight out of Forbidden Planet. However, that whole enduring of ‘50s cultural norms bit meant that the terrors of the Communist “Red Menace” never went away, and eventually the US and China went to war – a war that ended abruptly in 2077 with a nuclear holocaust. Fast-forward a couple of hundred years (this instalment kicks off in 2281), and the games play out in a nuked American wasteland.

New Vegas is something of a Fallout mongrel. The original games were made for the PC by Black Isle Studios in the late ‘90s, but the series floundered after original publishers Interplay went bust. A couple of titles of dubious canonicity were made, before Elder Scrolls developers Bethesda bought the rights and made the award-guzzling Fallout 3 in 2008. However, despite critical and commercial success, some fans of the original pair of games were unhappy with the new title and as such New Vegas, while using the 3 engine and published by Bethesda, is the work of Obsidian Entertainment – a company that includes many members of the Black Isle team that made the first two games over a decade ago.

Got all that? Good.

The most obvious difference in New Vegas from previous titles is the relative lack of radiation. Fallout backstory dictates that Nevada was not directly nuked, so unlike previous games the scenery is largely intact. Most buildings have electricity, the skies are blue (albeit with a few sickly green clouds), water is clean and society is a bit more civilised than veterans of the Capital Wasteland will be used to. It’s a pleasant change, and allows for a slightly different feel.

The story casts you as a courier. At the game’s opening, you’ve been tasked with delivering a poker chip made of platinum – but when you take control of your character, you find yourself bound and staring down a gun. One shot later, and that’s apparently it.

Except it’s not, of course, and you wake up in a doctor’s surgery. The good doc asks you to make sure he’s reconstructed your face properly, which is a sneaky way of introducing the character builder. Make your man/woman and exit to find yourself in the Mojave Wasteland, the area surrounding Las Vegas.

It quickly becomes apparent that this desert setting is seeing a civil war between the New California Republic – an attempt to restart a system of government that may have pure interests, but is willing to walk over the little guy to get there – and Caesar’s Legion, a seemingly nutty band of slavers that dress like ancient Romans and spout Latin. It may appear to be a clear-cut good vs. evil, but this is Fallout, and things are never that simple.

It gets more complicated when you eventually track down your would-be murderer – he’s a bigshot on The Strip, the bit of Vegas that’s still, well, Vegas. Get in there (not easy in itself) and you’ll find your antics have attracted the attention of the mysterious Mr. House, casino boss and overseer of The Strip. You’ll end up with multiple possible endings depending on who you align yourself with. Mr. House? The Legion? The NCR? Or will you flip all of them the Vs and try and sort out Vegas’ problems by yourself?

As mentioned earlier, this uses Fallout 3’s engine, so the central first-person action-RPG experience will be familiar to anyone who’s played that. There is a wealth of differences in the detail, though.

Foremost is your reputation. 3 had the Karma system, with you sliding up and down the Good-Neutral-Evil scale depending on your actions, which affected how others saw you. Vegas keeps the system, but adds in reputation for each of the major factions, cults and town populations, a la GTA2. Ranging from “Idolised” through “Accepted”, “Neutral”, “Shunned” and down to “Vilified”, anything you do to one particular group affects how they treat you. And getting cosy with one group will likely cause a different bunch to hate you, so it’s impossible to keep everyone either happy or angry – you’ll just have to choose who you want to ingratiate yourself with. But if you anger one lot – say, you’ve helped out the folk at Goodsprings (the town where you start off) fend off attack from the Powder Gangers (a bunch of explosive-happy ex-cons) – and you want to wander through their territory unmolested, grabbing one of their uniforms from a handy wardrobe/corpse will disguise you as one of them. So nicking a Powder Ganger outfit will make them pleased to see you, but if you wander back through Goodsprings still in the criminal garb, expect more than just angry looks.

Weapons and items have also been rejigged. Weapons now use both base damage and damage per second, as well as the target’s damage threshold, meaning you have to pay more attention to the stats. It’s a bit confusing, to be honest (we suspect it’ll be explained in the game’s manual, but our review copy came manual-less), but you can largely get away with ignoring it. In addition, you can now kit out favourite guns with extra bits (silencers and the like), there are multiple types of ammunition (armour-piercing, etc.) and you can make your own bullets by collecting cases and powder, allowing you to customise your inventory further to suit your own playing style. As for items, food now takes time to heal, making it less useful in battle situations, but there’s lots more – the lack of radiation means plants are plentiful, and you can pick ingredients to cook fancier eats on a campfire.

Speaking of cooking on campfires, a noticeable thing about Vegas is the amount of Western influence. What with being set largely in a cactus-filled desert, there’s a distinct cowboy feel to the game – grizzled prospectors, rundown saloons and the like. Heck, one early optional quest sees you rounding up your own posse for a showdown. If it wasn’t for the fact that this game has been in development for a while, we’d say that the success of Rockstar’s Red Dead Redemption was an influence.

(Not to say there aren’t other influences from the gaming world – one quest, where you charge round a derelict missile silo as Feral Ghouls leap out at you, is equal parts Half-Life and Resident Evil, while another one that sees you sneaking round a swanky hotel is pure Hitman.)

For all the new bits, some problems from the last game remain. In 3 you basically couldn’t see at all at night or in dark buildings – the clear skies of Nevada mean that the former’s no longer an issue, but interiors can still be tricky. You do get a new perk, Friend of the Night, that improves your eyesight in low light, but it’s a bit cheeky to present it as a great new feature to fix a problem that could’ve been sorted with some fiddling with the core engine.

Also, the map system is the same as before. As such, it’s perfectly useable when wandering the plains, but utterly hopeless when you’re traversing multiple-levelled areas. The aforementioned missile silo quest is made much harder than it needs to be for the simple reason that it’s really difficult to work out where you’re meant to be going.

Worst of all, the engine’s nasty crashing habits return. The game’s only outright crashed on us twice, but that’s two times too many.

Speaking of difficulty, the game as a whole seems a bit trickier than 3. Stats when you level up are less generous, perks (which are about 50% old favourites like Bloody Mess, Mysterious Stranger and Fortune Finder, and 50% new ones) are only awarded after every other level, and the wildlife in general seems a bit tougher. Radscorpions take more of a beating, Golden Geckos – the nastier versions of the first enemies you encounter – are deceptively vicious, Lakelurks are like the first game’s Mirelurk Kings but about twice as nails (thankfully, we’ve only encountered them once as yet) and there are more of the dreaded Deathclaws to fill the hole left by the Super Mutants (there are some, but not many, and a lot are non-hostile).

Of course, if that’s still not hard enough for you, you can show off with the terrifying Hardcore mode. In this mode, hunger, thirst and sleep deprivation become ongoing concerns; ammo now has a weight, meaning you have to watch what you carry even more; crippled limbs can no longer be healed with Stimpacks, meaning you either have to search out the rare Doctor’s Bags or find an actual doctor to set your bones…you get the idea. You can turn this option on and off at will, although you get special plaudits for going from beginning to end with it on.

Of course, a lot of what makes Fallout Fallout is the atmosphere. As mentioned, the Wild West hangs heavy over this title, and it makes a refreshing change from Washington’s yellow skies and piles of rubble. The setting of Vegas also adds interest in the heavy gambling and Rat Pack vibes (Sinatra’s version of “Blue Moon” is more or less the game’s theme tune). The series’ trademark black humour is in full swing: we’re particularly fond of Vikki and Vance, who appear to be Fallout’s answer to Bonnie and Clyde – until you reach the casino dedicated to them and find out they were a bit rubbish at crime.

The twisty plot is decent, although it does feel a little like rehashing 3 in certain parts (we’ll be vague to avoid spoilers), and conveyed by a typically great cast. We’re not ones to star-spot, and the majority of work is done by unknowns, but if you want a hint of some of the better-known names in here: Kris Kristofferson pops up, Michael Dorn – Lieutenant Worf from Star Trek to you – voices a friendly Super Mutant (the same one he played way back in Fallout 2, no less), nerd-princess Felicia Day (The Guild, Dollhouse, Buffy) has a role as one of your potential companions, and – weirdest of all – the guy who shoots you at the beginning of the game is Matthew “Chandler from Friends” Perry.

Fallout: New Vegas is big. Really big. Big enough that this review has barely scratched the surface. The basic question, of course, is “Is it good?” Well, yes. Yes it is. If you strung us up over a Deathclaw-filled pit, we’d probably admit preferring Fallout 3 to New Vegas – slightly more enjoyable quests, better atmosphere – but then, 3 is held as one of the best games of last decade and a heck of a thing to match up to (and we’ve clocked up quite a few more hours on it). On its own, New Vegas is a wonderful playground, or a tightly-plotted adventure, or…well…whatever you want it to be. Which is what Fallout’s all about, really.

Fallout: New Vegas is out for Xbox 360, PlayStation 3 and PC from this Friday (22nd October).