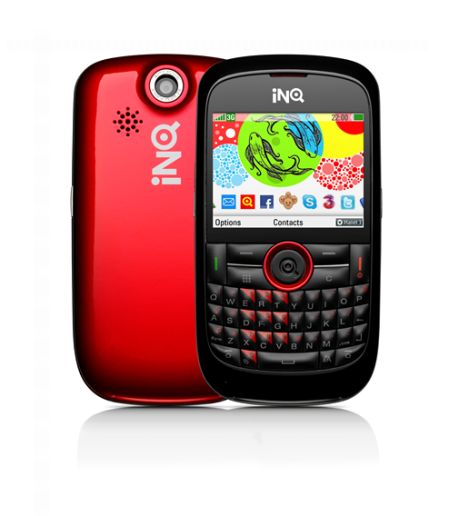 INQ Mobile has its first Qwerty phone – and if you want one, it’s out in the UK today. INQ’s “much anticipated” Qwerty keypad phone with built-in Twitter has gone on sale in 3 Stores across the country and online.

It’ll set you back £99.99 on Pay As You Go, which includes 3’s bonuses of free internet, a bundle of texts, free UK calls to everyone on 3 and free voicemail for 90 days every time you top-up (as well as free Skype-to-Skype calls and Windows Live Messenger even when you don’t).

Or you can sign up for a £15-a-month contract and get the phone free, as well as unlimited texts, internet access and 3-to-3 calls, as well as 75 anytime any-network minutes, and free, unlimited Skype-to-Skype calls and Windows Live Messenger while you’re in the UK.

“The INQ Chat 3G is the ultimate social tool which will leave PCs gathering dust on their desks,” a 3 spokeswoman says.

“As well as built-in Windows Live Messenger and Skype, the INQ Chat 3G comes with proper Facebook and Twitter with the full range of functionality you’re used to on a PC. The phone’s personalised home screen widgets keep you in constant touch with your online world.”

The INQ Chat 3G can also act as a plug and play modem, which gives your laptop wireless broadband access (add-ons start from £10 for 1GB access).

And it comes with a range of customisable coloured backs, with the red one displayed below.