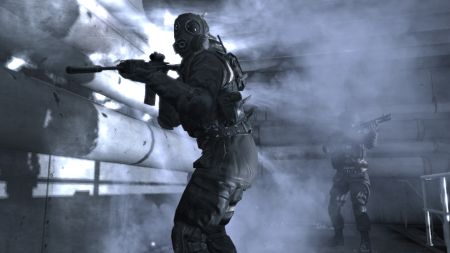 Play a lot of first-person shooters, do you?  Well, congratulations – you’re improving your eyesight, according to a new scientific study.

The research, which appears in the current issue of US scientific journal Nature Neuroscience, takes a good hard look at how long-term gaming affects vision and has found that your contrast detection – the ability to see in the dark and read that degrades in old age – can actually be improved by the likes of Call of Duty and Counter-Strike.

The researchers were surprised to discover that shooter fans’ ability to pick up changes in grey tones against a uniform background increased over time.  “This is not a skill that people were supposed to get better at by training," said lead researcher Daphne Bavelier, a professor at the University of Rochester, New York.

“It was something that we corrected for at the level of the optics of the eye – to get better contrast detection you get glasses or laser surgery.”

To ascertain that there wasn’t an unknown factor nudging the results, the scientists set up an extra experiment, hooking up participants for 50 hours of gaming – one group playing Call of Duty, the other playing an unnamed game that was apparently “a rich visual experience, but bereft of action”.

“We found that the people in the first group improved by 43 per cent, and the other group not at all,” said Bavelier.

Next week, we’ll report on how Resident Evil 5 increases your sex drive. Maybe.